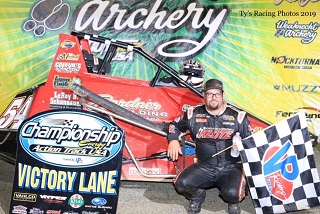 A one-month forced hiatus had everyone aching for some racing at Kutztown’s Championship Energy Action Track USA. And Wednesday night’s Ronnie Tobias Memorial did not disappoint as the fast and furious competition kept the fans on the edge of their seats in every one of the five big feature races.

The seventh annual Ronnie Tobias Memorial, presented by Scott Fick Plumbing, Heating, & Cooling along with VBC Construction, was highlighted by Twin 20’s for the USAC All Pro SpeedSTRs. Ohio’s Matt Westfall and Jersey boy Billy Pauch Jr. were victorious in those 20-lap mains, with each driver also finishing second to the other in the feature he didn’t win.

A wildly entertaining Hyper Racing EVO Injection 600 Sprint feature came down to the last lap, where the gloves came off and the sparks were flying as Colin White ducked under the first and second place cars to snatch the popular victory.

Dylan Hoch scored his third All Star Slingshot triumph of the season in that division’s 40-lap main, and Kasey Hufcut recorded a dominating win in the 15-lapper for the Junior Slingshots.

Championship Energy Action Track USA swings back into race mode on Wednesday, July 17, with a third attempt (of the year) to run the Goldie & Elton Meitzler Memorial for the USAC SpeedSTRs, Hyper Racing EVO Injection 600 Sprints, All Star Slingshots, and the Berks County debut of the Restricted 600 Sprints. This will be a very special event because, for the first time since the speedway was renovated and became Action Track USA, the 600 Sprints will compete with wings bolted to the top of their roll cages.

“We’ve definitely found something with this car…it’s really dialed in right now,” explained Matt Westfall after his second straight SpeedSTR victory came in the first of Wednesday night’s Twin 20’s.

“The Flying Buckeye” lived up to his nickname in the opening 20-lapper, as he snared the runner-up spot from Earl Paules on the second trip around the clay, then fought off strong challenges from Trevor Kobylarz, Paules, and Tim Buckwalter during the first half of the race. Westfall eventually pulled ahead of those three competitors and began a slider-throwing battle with leader Steve Buckwalter. Westfall finally nosed ahead and became the leader on the 11th tour, leaving S. Buckwalter to duel with his cousin, Tim, in a slidefest for second place.

Steve Buckwalter began to backslide through the top five as Billy Pauch Jr., rebounding after his involvement in a multi-car incident on the original start, moved up to challenge Tim Buckwalter for runner-up honors. Soon after a restart with four to go, Pauch Jr. worked the low groove to wrestle second away from T. Buckwalter. He chased Westfall to the checkered, finishing 1.100-seconds behind the Ohio driver’s No. 54. Tim Buckwalter, Trevor Kobylarz, and Earl Paules (with significant front end damage to his No. 8) made up the top five while TJ Mayberry, who started 18th, sliced his way to sixth at the end.

Race number two saw TJ sneak by Ken Meisner to lead the first revolution. On the fourth circuit, Billy Pauch Jr. went from third to first, passing both Meisner and Mayberry to gain the point. With Pauch, who hails from Milford, NJ, setting sail out front, attention turned to a terrific fifth-place scuffle between Kobylarz and Westfall. They traded the position several times until the yellow flag appeared at the halfway mark of the 20-lap affair. On the restart, Westfall powered into third. He and Meisner swapped slide jobs over the second half of the event until Westfall claimed the runner-up slot for good with four laps remaining. At the finish it was Pauch Jr. in for the win – his second in the Ronnie Tobias Memorial but first since the inaugural event back in 2013. It was also Pauch’s second SpeedSTR triumph of the season and his all-time leading 17th win at the Berks County oval.

Westfall had to settle for second in this one, with Meisner scoring his best-ever Action Track USA finish by placing third. Alex Yankowski climbed from 18th to fourth and TJ Mayberry wound up fifth.

The 25-lap feature for the Hyper Racing EVO Injection 600 Sprints will be remembered for a final two-lap shootout after a caution period with 23 complete. But prior to that, Tim Buckwalter, the all-time 600 Sprint win leader at Action Track USA, set the pace after starting on the pole. Nash Ely, Colin White, and Billy Koch waged war for the second spot, but that fight turned into a two-car tussle when Ely began to slip back through the field. White and Koch scratched and clawed as they battled for second, with Koch gaining the advantage with six to go. When White attempted to dive back under the No.. 66 in turn one, he got in a bit too hot, bumped the Koch machine, and nearly spun. White was able to gather his mount and continue, but he lost two positions in the process. As he admitted afterward, “I thought I gave it away right there.”

But, in the immortal words of Yogi Berra, it’s never over until it’s over, and White was far from finished. When the clutch burned up on the Koch No. 66 and it wouldn’t take off on a restart with two tours left, he collected Jason Swavely and the yellow flew again. That set up the final, frantic restart and two-lap slugfest that decided the race.

Buckwalter still led, and Strada was now second with White back to third and 14th starter Billy Pauch Jr. in fourth. As they roared back into turns one and two, Buckwalter chose the high groove but got a little loose exiting turn two. Strada shot to his inside and pulled ahead as they drag raced down the back chute. Buckwalter went back to the top in three while Strada picked the middle of the banking, and White, in a dramatic charge, made a bonzai dive to the bottom. As White nosed ahead, Strada slid up and Buckwalter came off the middle of turn four. They were three-wide for an instant, but White motored on as Buckwalter and Strada made hard contact at the exit of the fourth turn. Both cars came to a stop, side by side and just about 75 feet from the checkered flag.

White streaked to the line, notching his second career win at the speedway on the Kutztown Fairgrounds. Pauch Jr. avoided the disabled cars of Strada and Buckwalter and finished second with point leader Kenny Miller III ending up third. Eleventh-starting Damon Paul weaved his way to fourth and John Barnett maneuvered from 16th to fifth.

Mertztown, PA’s Dylan Hoch started third in the 40-lap main for the All Star Slingshots, but he did not stay there for long. Hoch ducked under Taylor Mills to grab second on the second trip around the clay. Mills, Dave Carraghan, Jared Silfee, and Scott Neary scuffled for third as Hoch went after race leader Brett Bieber. On the seventh circuit, Hoch muscled past Bieber to secure the top spot while Mills, Carraghan, and Silfee went three-wide for third. As Hoch took off with the lead, Carraghan emerged from the three-car fight to run third and he began to hassle Bieber for the runner-up position. That battle went right down to the wire as Hoch cruised to his third victory of the year and Bieber held off Carraghan for second place money. Silfee and Neary completed the top five.

Kasey Hufcut won his first Junior Slingshot feature at Action Track USA, leading all 15-laps of the event. Aidan Donaldson, Paulie Hartwig III, Tyler Ulsh, and James Hendricks diced for positions two through five throughout the race, with Ulsh finally claiming second place and trying, but not succeeding, to run down the leader.

Hufcut waltzed to the victory over Ulsh, who was last year’s Junior Slingshot point champion at Action Track USA. Hartwig ran a stong race to finish third, with Hendricks and Logan Bauman rounding out the top five.

The healthy car count included 24 SpeedSTRs, 43 of the 600 Sprints, 23 All Star Slingshots, and 14 of the Junior Slingshots.

Due to the format of the Ronnie Tobias Memorial (Twin 20’s for the SpeedSTRs and five total features), only the Junior Slingers ran heat races. The SpeedSTRs, 600 Sprints, and All Star Slingshots took part in timed dashes (group time trials), then the fastest drivers in the 600’s and Slingshots competed in Dash Races to determine the top starting positions in their respective features. A pair of B-Mains were also run to lock in the final qualifiers for the 600 Sprint main.

The two Dash Races for the 600 Sprints went to Jason Swavely and Tim Buckwalter, who both earned a new Hoosier right-rear tire for their victories. The 600 B-Main winners were Chad Sandt and Austin Quick.

Wednesday, July 17 is the Goldie & Elton Meitzler Memorial as the SpeedSTRs compete in a 30-lap feature, the All Star Slingshots will go 20-laps, the Restricted 600 Sprints debut with a 15-lap main, and the Hyper Racing EVO Injection 600 Sprints run wild and winged for the very first time at Action Track USA. They will compete in a 25-lap feature and all divisions will also take part in qualifying events.

Pit Gates open at 4 p.m. and grandstand ticket booths open up at 5:00. Warm-ups get underway at 6:15 and racing begins immediately after the hot lap sessions.

Coming up on July 24 is the twice rained out Dick Tobias Classic for the SpeedSTRs. The 75-lapper that pays $5,000 to win will kick off the evening, then it’s a full program of USAC All Pro SpeedSTRs, Hyper Racing EVO Injection (wingless) 600 Sprints, All Star Slingshots, and Junior Slingshots. The All Star Slingers will compete in the Kutztown Komet 100, the race in which all cars that enter will start the 100-lap grind.

The month of July ends with the USAC NOS Energy Drink National Midget Championship making its Action Track USA debut on Wednesday the 31st. Joining the mighty Midgets will be Night One of Hyper Racing 600 Sprint Speedweek presented by 600cc Performance. The entire program is being sponsored by Belfor Property Restoration of Allentown.

That is alot of reasons to come on out for your midweek motorsports adrenaline rush, at the track where the Superstars come to race…Championship Energy Action Track USA on the Kutztown Fairgrounds!