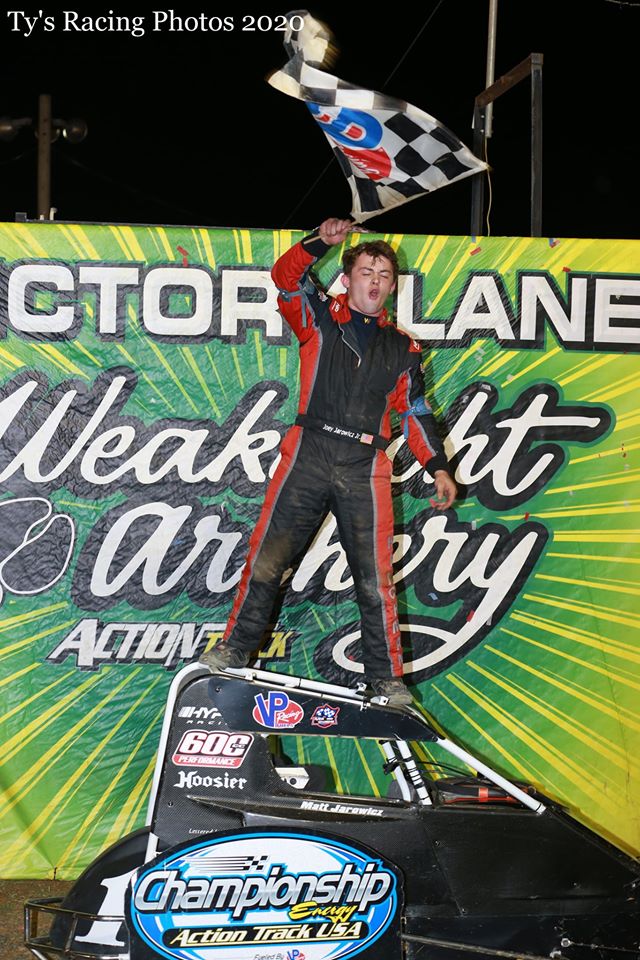 Steve Drevicki has been on a tear in the since taking the seat for Tim Buckwalter in the number 52 car. Drevicki looked like maybe he had cooled off Sunday night as he had to transfer through the BMain. With Drevicki rolling off 18th, it was a surprise when he joined the top five and the battle for the race win. It wasn’t long before race leader Louden Reimert and Drevicki were trading slide jobs on both ends of the race track. The battle was cut short by Reimert’s car ducking to the infield. Drevicki withstood some late race restarts to claim the $3,000 payday during the 40 lap season ending feature. Briggs Danner had his best run of the season finishing second followed by Mike Bednar, Billy Pauch Jr., and Alex Yankowski.

Steve Buckwalter’s sixth place finish was enough to net him the 2020 Speedstr title. “We just were not that good tonight; it wasn’t the night to try a bunch of stuff. We just did what we had to do,” said Buckwalter after the race. He added that he comes to win every week and that’s why he isn’t a point racer, but a championship is nice bonus.

When the season started there were two Jarowicz cars in the field each week in the Hyper Racing/ Evo Injection 600 Micro Sprints. Part way through the season Joey Jarowicz took over the driver duties of the 1 car after his car was wrecked. With the bad luck out of the way Jarowicz was finally able to get to victory lane to close out the season. Eddie Strada made a late season run at the championship with consistent podium finishes, he ended up second in this one. Another driver able to get the “monkey” off of his back was Billy Koch. He best run of the season saw him third at the end of the night. Christian Bruno and Billy Pauch Jr. were the top five finishers.

Colin White’s tenth place finish was enough to garner him the 2020 title following a win on Wednesday night.

It was not the first time a Neary family member was in victory lane in the All Star Slingshots at Action Track in 2020, but it was the first visit for Scott Neary. The Indoor Auto Racing champion took the race lead from Tyler Ulsh early on and never looked back on his way to the checkered flag. Ulsh was second with Taylor Mills third.

The Sunday night race concluded the season at Action Track USA. For details regarding off season events as well as the 2021 racing season you can visit Action Track USA on social media or ActionTrackusa.com.