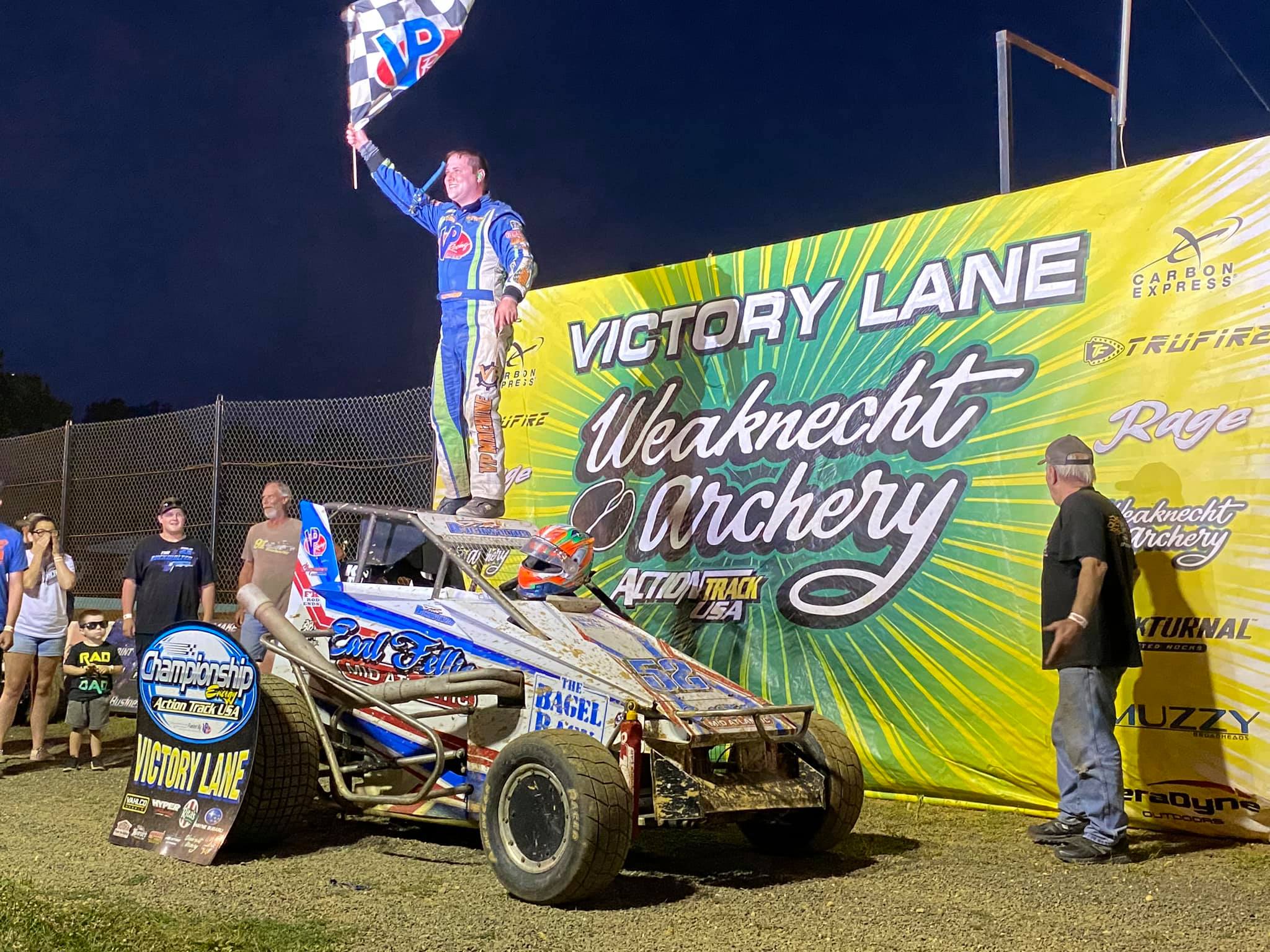 In what could be classified as the Usac All Pro Speedstr race of the season so far at Championship Energy Action Track USA, Steve Drevicki returned to the seat of a Speedstr at Action Track and went to victory lane on Glick Fire Equipment/ First Responders Night. Christian Bruno broke through in the Hyper Racing/Evo Injection 600 Sprints while Sam Neary and Aidan Donaldson doubled up their season win totals in Slingshots.

Kenny Miller III looked poised to win his first Speedstr A Main at Action Track in the Speedstrs. Miller dominated the event while a fantastic battle ensued for the second spot that saw Steve Buckwalter trade slide jobs with Steve Drevicki for at least ten laps straight in each corner of the speedway. Drevicki finally wrestled the runner up spot away from Buckwalter right before a late race yellow took away Miller’s big lead. The lap 27 restart was not the turning point of the event, but it set up that very moment. Drevicki began to challenge Miller, but Miller beat each challenge until the final corner.

Drevicki slid in front of Miller in the final corner and played his move perfect that Miller could not pull the cross over coming to the checkered flag on the final lap. Drevicki win came by .148 seconds over Miller, Steve Buckwalter, Alex Yankowski, and Billy Pauch Jr.

Drevicki is subbing for injured driver Tim Buckwalter and in victory lane handed a lot of the credit to Buckwalter and his team. “I didn’t ask them to change much,” said Drevicki. “It’s just a good car and a good set up, I just had to be good too.”

It’s not often you hear speedway announcer Barry Angstadt say the phrase Mike Rutherford and passed for the lead. It might be even more unhear of to hear Damon Paul’s name used for the driver going to second spot. Both Rutherford and Paul had shots at the front of the Hyper Racing/Evo Injection 600 Micro Sprint feature race before Christian Bruno took the lead for the good.

Bruno drove to his first career Action Track win after another incredible race for the lead. Paul took the top spot from Rutherford on lap six and held it until lap 20 when Bruno worked his way by. Paul made it challenging for Bruno as the two dueled for much of the closing laps. Bruno, Paul, Billy Pauch Jr., Joey Amantea, and Kenny Miller III were the top five finishers.

Damon Paul, Fred Heinly, and Billy Koch won the heat races while Joe Kay and Kenny Miller III were winners in the B Mains.

Sam Neary used the luck of the draw and his good starting spot to bolt out to the early race lead in the Slingshot feature event. Neary paced the field for all 20 laps taking the checkered flag and his second win of the season after holding onto the top spot through a few mid race yellow flags. Neary’s win came in the lone Northeast Tour series stop at the season at Action Track.

Next Wednesday Aug 5, is the much anticipated return of the USAC National Midgets Presented by Belfor Restoration and Storm Chassis plus 600 Sprint Speedweek!

Wednesday August 12 the USAC All Pro SpeedSTRs will return along with the Hyper Racing EVO Injection 600 Sprints and the Junior Slingshots. It is the Fair Nationals race for the 600 Sprints paying $2000 to win with gamblers bonus and is run over 60 laps.