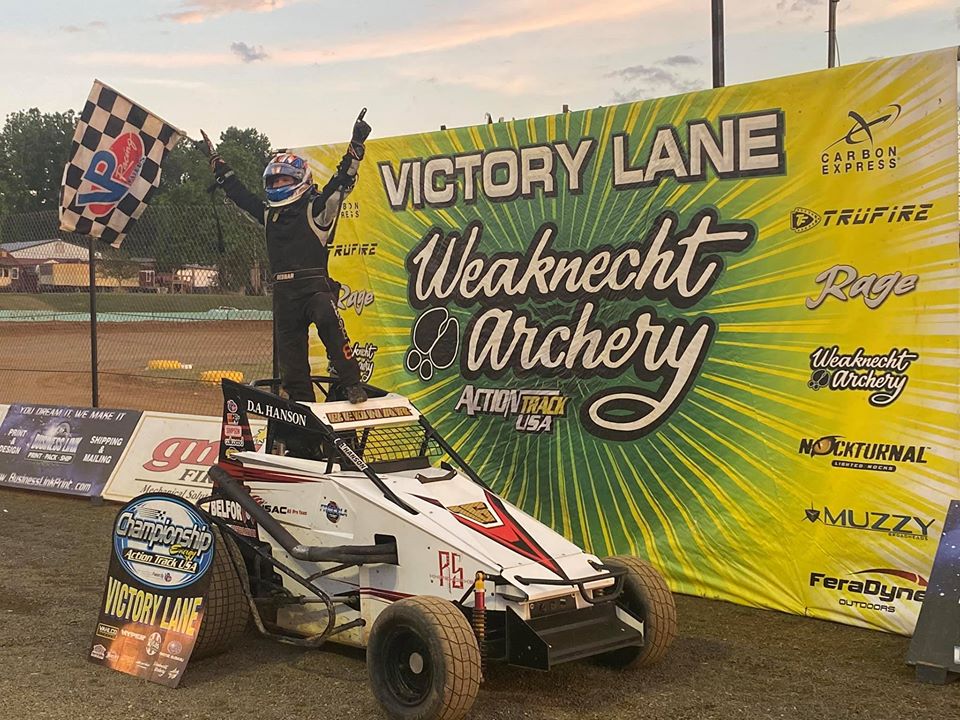 The Action Track USA bolted back into action to open the month of July. Mike Bednar, Collin White, Gavin Danner, and Aidan Donaldson won races on a night that can only be explained as unique.

Mike Bednar is a former Speedstr National Champion but going into July1 Bednar only had one Action Track USA win. That changed when the Slatington, Pa native held off many challenges from Tim Buckwalter and Ryan Godown throughout the 30 lap feature event.

Bednar led from his second starting spot after a battle with Louden Reimert. Buckwalter picked his way to second from seventh by lap 18 while Godown charged into the fray from tenth. Bednar survived a late race restart to take the win over Buckwalter, Godown, Reimert, and Gary Wagner.

It was the first Action Track Usa win for car owner DA Hanson.

“I don’t race a lot anymore,” said Bednar in victory lane. “This ride fits me well and gives me a chance, it’s kind of an emotional moment.”

Heat races for Speedstr’s were won by Jared Silfee and Trevor Kobylarz.

Logan Rumsey led the first six laps of the feature event for the Hyper Racing Evo Injections 600 Micro Sprints. Damon Paul raced his way to the front from seventh to snag the lead away from Rumsey. Collin White kept pressure on Paul for much of the race along with Eddie Strada.

It was a lap 19 restart that changed the complexion of the event when on a restart, the race leader Paul, flipped coming to the green flag. In a wild turn of events Colin White inherited the race lead and never looked back.

We are always good here said White in victory lane after stating he wished Paul was still there at the end so they could have raced it out. White bested Strada, Tim Buckwalter, 14th starter Kenny Miller III, and opening night winner Alex Bright.

In the Slingshot feature it seemed to be a curse to lead the event. Sam Neary looked to have the race in control when his car slowed under a yellow for his teammate Danny Buccafusca who lost a wheel. The top two dropped behind the wall and Paulie Hartwig III took over the race lead. Hartwig too, was bit by the bad luck bug and dropped out after leading two laps. Gavin Danner was next to take the helm. Danner paced the field for the final circuits and closed the race out holding off a hard charge from Blaire Schonely in the last corner.
Danner admitted in victory lane he wasn’t really sure what happened, but when the opportunity arose, he took full advantage of it on his way to his first Action Track win. Schoenly was second with Ryan Bilello third.

All Slingshot drivers received a free Rita’s from Rita’s and the Fan Zone Grill!

The next race at Action Track USA will be the eighth annual Ronnie Tobias Memorial. Honoring the memory of a talented dirt Modified wheel man and brother to Action Track USA co-owner Rich Tobias, the program will once again be highlighted by Twin 20-lap features for the USAC All Pro SpeedSTRs. They will be joined by the Hyper Racing EVO Injection 600 Sprints and the All Star Slingshots.

It will be Scott Fick Plumbing, Heating & Cooling, and VBC Construction night at the Speedway.