Back to Back for Buckwalter; Miller, McLaughlin, Hendricks also winners 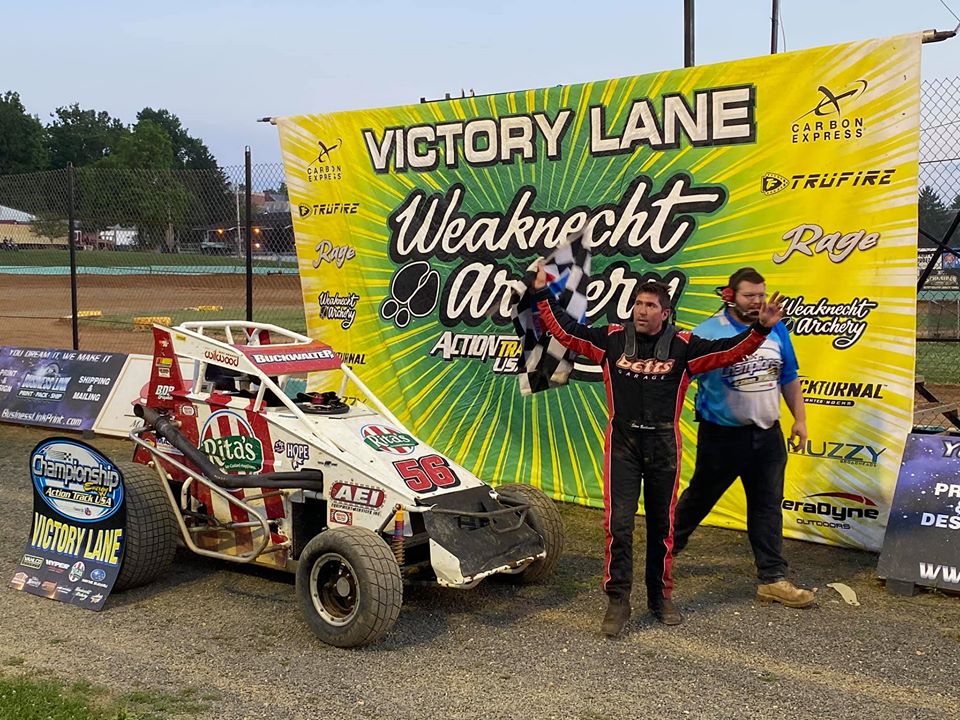 Back to Back for Buckwalter; Miller, McLaughlin, Hendricks also winners

The Troy Moyer Memorial was full of twist and turns at Championship Energy Action Track USA on Wednesday night. Steve Buckwalter was back in victory lane joined by Kenny Miller III, Shelby McLaughlin, and James Hendricks.

Louden Reimert had a lot of different challengers during the USAC All Pro Speedstr feature race of Wednesday night at Action Track USA. Reimert’s biggest challenge came from a very momentum driven Steve Buckwalter. Buckwalter started winning a week ago at Action Track in the Speedstr and then backed it up with a 410 Sprint Car Victory this weekend. Buckwalter muscled his Speedstr around the speedway using both the high side of the race track and the inside as well. It was lap 22 when Buckwalter worked his way past Reimert into the race lead for good. Once in the front Steve Buckwalter drove away from cousin Tim Buckwalter on his way to the win.

“The tracks been really racy the last few weeks,” said Buckwalter in victory lane and he added that he finally feels like their team is rolling. Buckwalter inserted a plug looking for an engine for his sprint car to compete this weekend. Speedway announcer Barry Angstadt pointed out that Buckwalter is bringing in the money right now winning the $2,000 to win Speedstr feature events the last two weeks.

Tim Buckwalter and Reimert were the podium finishers just ahead of a hard charging Jared Silfee who started 17th. Briggs Danner rounded out the top five finishers.

Defending champion Kenny Miller III returned to the top of the mountain in the Hyper Racing Evo Injection 600 Micro Sprints. Miller moved around race long leader Logan Rumsey on lap 12 to take over the race lead and then drove away from a fantastic battle for the runner up spot. Joe Kay came out on top in that battle to finish on the podium for the second week in a row. Billy Pauch Jr. was third across the line.

In victory lane Miller said they were in a hole because of his dismal pill draw, but it felt good to rebound the way they did for the win. Miller’s winning move came on the outside, but more by necessity than choice. “I didn’t think Logan was coming off the bottom and he wasn’t making mistakes, so I had to use the top. Once I took the lead I was back on the bottom because that’s where we were locked down,” said Miller.
Rumsey and last week’s winner Colin White were the top five finishers.

Shelby McLaughlin made her first start at Action Track USA since 2019 and used a good starting spot to hold off last week’s feature winner Sam Neary for much of the race to grab her first All Star Slingshot win at the track. McLaughlin revealed after the race that she does not normally drive the car she in for the night’s win, but it was “nice” to drive.

McLaughlin and Neary were racing each other that hard they were still able to get away from third place Danny Buccafusca by over four seconds. William Mohring and Gavin Danner rounded out the top five across the line.
McLaughlin won the heat race for the Slingshots.

Next Wednesday night, July 22, Action Track returns to racing with Speedstrs, 600 Micro Sprints, and the Slingshots.

Don’t forget we are just weeks away from the Aug 5 and the USAC National Midgets Presented by Belfor Restoration and Storm Chassis plus 600 Sprint Speedweek.