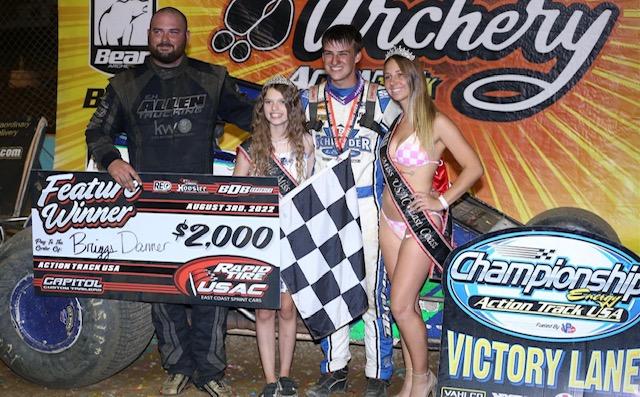 The Rapid Tire USAC East Coast Sprint Cars competed in two, 30 lap features with Christopher Allen Jr. and Briggs Danner driving to victory lane. Danner’s triumph in the evening’s nightcap was an instant classic as he, Alex Bright, and Carmen Perigo Jr. engaged in a scintillating three-wide slide fest over the final tours that left the season’s largest crowd aching for more.

Christian Bruno nipped Colin White at the finish of the Hyper Racing 600 Sprint main, winning the drag race off turn four by a scant 0.012 seconds.

Brett Bieber won his second All Star Slingshot feature of the season and Matthew Laubach, the “Salt Shaker”, notched his first Junior Slingshot victory at Action Track USA in that division’s 15 lap main.

Next week is Kutztown Fair Week and that means a big week of racing at the fairgrounds. Wednesday, August 10 is set for the 600 Sprint Fair Nationals, highlighted by a 50 lap feature paying $1,500 to win. Joining the 600 Sprints will be the Speedway Entertainment All Pro SpeedSTR’s.

On Thursday, August 11, the speedway gates will swing open again as the All Star Slingshots, Junior Slingshots, Xcel Modifieds, and Vintage Cars take part in their portion of the Fair Week Nationals.

The E.. Schneider & Sons 30 lapper saw Chris Allen Jr. (who won the Iron Cowboy Classic earlier in the night) lead from the pole while fending off the challenges of Mark Smith. Perigo closed in on Smith, passing the Sunbury, PA resident for the runner-up spot on the sixth trip around the oval.

The defending series champion, Alex Bright, was a man on the move as the race neared its halfway point. Bright zipped into third, passing Billy Pauch Jr. and Danner before taking third on lap 16. Perigo then executed a nice slide job on Allen to snag the lead on the 17th revolution. Bright slipped past Allen for second with 11 circuits remaining, bringing Danner with him. On a restart with ten to go, Danner threw a slider on Bright and took over the runner-up position. Perigo and Danner proceeded to dazzle the big crowd with a slide fest for the top spot with Danner squeezing up in front of Perigo only to have the No. 21 blast back under him off the corners. Bright joined the party with a few laps left to run and the threesome put on a tremendous show as they traded sliders and also used the middle lane to shoot between the other two throttle-jockeys.

Danner snatched the lead with two to go as Bright and Perigo got together in turn four. Perigo got out of shape, but gathered in his high horse powered mount and continued.

Danner captured his seventh series win of 2022 in a fan pleasing affair that had right-rear tires bouncing off the walls with alarming regularity. Bright was a hard-earned second and Perigo turned in another stellar effort to finish third. Steve Drevicki and Mike Thompson completed the top five.

The non-wing 360 Sprint Cars first feature of the night was the held-over Iron Cowboy Classic that was postponed by rain on July 13. When the checkered flag waved on lap 30, Old Bridge, New Jersey’s Chris Allen Jr. recorded his first series win in several years. For much of the race, though, it appeared Allen was going to settle for second.

Aiden Borden set the pace in the early going before Colin White secured the runner-up spot on the 17th tour and zeroed in on the leader. On the 19th revolution, White and Borden went for the same piece of real estate in turns three and four, made contact with one another, and nearly caused another caution period. Borden’s No. 7B got very wiggly but the Lakewood, NJ driver was able to regain control and continue on, although he relinquished the lead and gave up second to Allen in the process.

White zoomed away from Allen as Danner took over third on a lap 23 restart. White looked like a sure winner until he went barreling into one and two on lap 28, and his No. 90 got completely out of shape. As White wrestled his angry stead, trying desperately to regain control, Allen took advantage, powering by White for the top spot as he launched off turn two. White recovered and went on the attack, closing back in on the leader. Unfortunately for White, he walloped the wall in turn four on the final circuit, allowing Danner and Billy Pauch Jr. to motor past him as his wounded No. 90 limped down the homestretch and he drove under the black-and-white silk in fourth position.

W/hite’s misery followed him into the Hyper Racing 600 Sprint feature, where he pounded the cushion relentlessly until he was able to swee around James Roselli for the lead on lap 16. Deptford, NJ’s Christian Bruno soon moved into third, then used a similar strategy to White in order to get past Roselli for the runner-up slot.

Bruno then set his sights on White, flinging his No. 5 into the banking at both ends of the speedway with reckless abandon. On the final trip around Berks County’s baddest bullriing, Bruno slid the leader in one and two, with White gassing back under him on the backstretch. White blocked another slider in three and four, but Bruno got a huge run off the banking and the duo flat-footed their mounts down the front chute with the checkered flag waiting for them. Bruno nosed ahead just as they crossed the stripe, winning his second race of the year at Action Track USA and the fourth of his career at the progressively banked oval.

White was a disappointed runner-up with Roselli finishing an impressive third. Alex Ruppert sliced his way from 20th to fourth and Sammy Martz Jr. placed fifth.

Like Bruno, Brett Bieber registered his second victory of he season in the All Star Slingshot 20 lapper. The triumph was the 12th of his career at Action Track USA, moving the Oley, PA wheel-twister within one of the track’s all time leader in Slingshot wins, Dylan Hoch.

Amanda Angstadt spun on the first lap, then hustled from the back of the pack to finish second—her first podium placement of the year at Action Track USA—while Chase Zimmer, Andrew Turpin, and Gavin Danner made up the top five.