Twice Is Nice For Tim Buckwalter at Action Track USA. Second Win of the Night is a Three-Wide Thriller in 600 Sprints 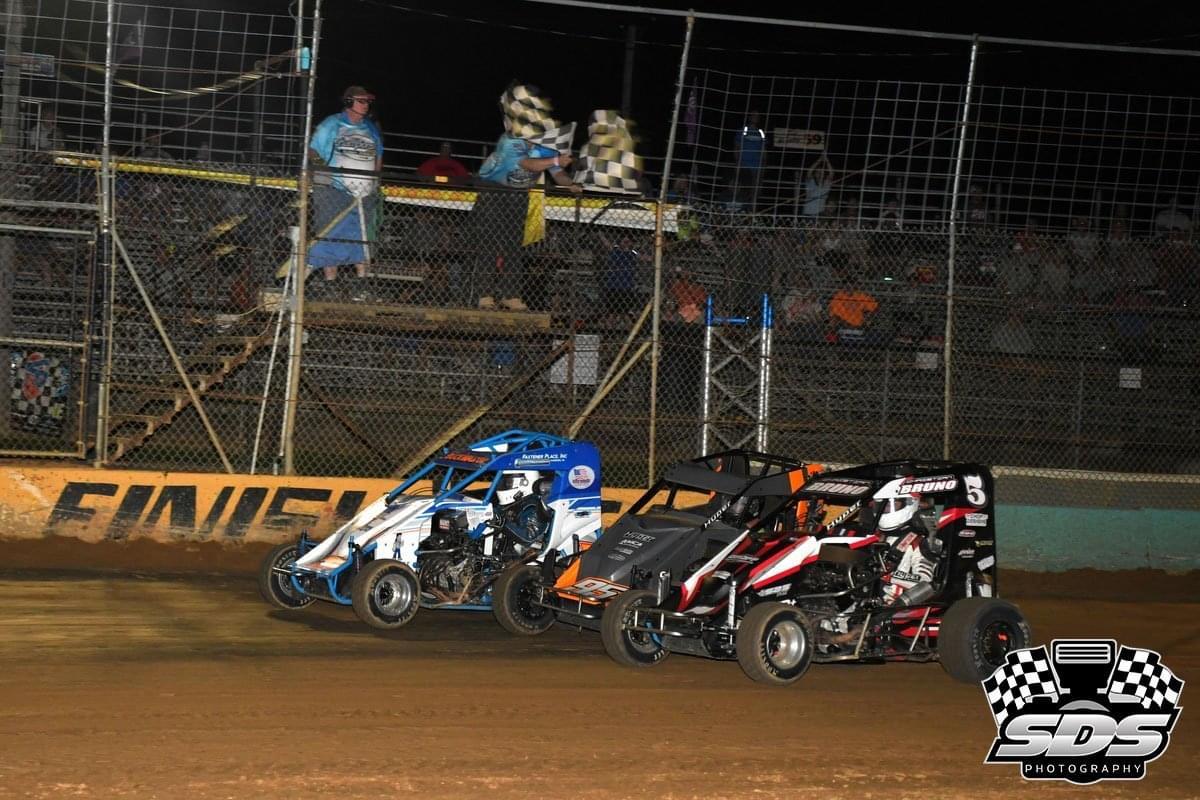 Twice Is Nice For Tim Buckwalter at Action Track USA. Second Win of the Night is a Three-Wide Thriller in 600 Sprints

Kutztown, PA (July 27)— Twice was very nice for Tim Buckwalter on Wednesday night at Championship Energy Action Track USA on the Kutztown Fairgrounds. The Douglassville, PA wheel-twister doubled his pleasure by winning the 30 lap SpeedSTR main and the evening’s regularly scheduled 600 Sprint feature—a race that was highlighted by the top three finishers crossing the line in a three abreast thriller.

Jackson White, from East Windsor, NJ, captured his first career 600 Sprint victory at the Berks County oval in a 25 lap feature that was postponed by rain on July 13. Danny Buccafusca picked up a ride and the win in the All Star Slingshot feature and Aubrey Romig registered the triumph in the Junior Slingshot 15 lapper.

The entire program was sponsored by Glick Fire Equipment and Belfor Property Restoration. A BMX bicycle stunt demonstration was presented at intermission and was a big hit with the younger race fans in attendance on Wednesday.

Cale Zangli led at the outset of the Glick Fire Equipment SpeedSTR feature, with 2017 point champion Tim Buckwalter grabbing the top spot on a second lap restart. Four circuits later, his cousin, Steve Buckwalter (the 2020 point champ) motored into the runner-up position. The Royersford Rocket had a few chances to overtake his relative on mid race restarts, but Tim’s Earl Fellin/ Bagel Rack No. 52 was dialed in and hooked up as he remained at the head of the field.

As the laps clicked off, T. Buckwalter opened a big lead over his cousin, with Dillon Steuer and Louden Reimert scuffling for third. Reimert prevailed in that battle and Tom Mayberry eventually wrestled fourth away from Steuer.

At the finish, it was T. Buckwalter winning handily over S. Buckwalter. Reimert, the previous week’s winner, placed third while Mayberry and Steuer raced home in fourth and fifth.

“We’ve struggled here this year,” admitted Tim Buckwalter in his victory lane interview. “We were all pretty frustrated, but Paul Lotier spent some time with us the past couple of weeks and he got us straightened out. I have to thank all my guys for hanging in there and especially thank Paul—he’s a really busy guy—but he got us going in the right direction again.”

Matt Janisch was quickest in the Timed Dashes with a fast lap of 11.527 seconds. The Buckwalter cousins were victorious in the two heat races.

The Belfor Property Restoration 600 Sprint feature was the evening’s nightcap, and, while the whole race was competitive and entertaining, the final lap was definitely highlight reel material.
Ryan Boyd led from the pole, then Zack Weisenfluh took over on lap three. By the tenth tour, eighth-starting Tim Buckwalter zipped into second as Christian Bruno (started tenth) and Steven Snyder Jr. (started 11th) were navigating their way toward the front of the pack.

With seven trips remaining in the 25 lap affair, T. Buckwalter muscled past Weisenfluh to claim the lead. Snyder, who was driving Jim Radney’s No. 95 on Wednesday, soon drove by Weisenfluh for second and it wasn’t long before Bruno planted his No. 5 in the third position.

Snyder slowly closed the gap between himself and Buckwalter. A yellow with two to go put him on the leader’s tail tank, and the lap following the restart saw the Maryland racer execute a “Snyder Slider” on Buckwalter in turns three and four. Buckwalter throttled back past his rival on the homestretch, only to have Snyder duck under him once again in corners one and two. They ran out of real estate as the cars accelerated onto the back chute, making contact that nearly sent Buckwalter into the outside wall. Just as that happened, the caution flag appeared once more, setting up a one lap dash to decide the outcome.

On the frantic and fateful final circuit, Snyder pulled to the inside of Buckwalter as they exited turn two. Buckwalter ran him low on the backstretch to prevent the slide job in three and four. As the duo mashed their respective throttles to launch off of four, Bruno dashed under both of them, and it was a three-wide, all-out drag race to the checkered. They crossed the line three abreast, with Buckwalter nosing out Bruno by 0.035 seconds and Snyder, the meat in the high speed sandwich, crossing the line in third—just 0.002 seconds after Bruno tripped the scoring monitor.

Buckwalter earned his second Hyper Racing/EVO Injection 600 Sprint victory of the season, and the 18th of his Action Track USA career. He is the track’s all-time leader in 600 Sprint triumphs…but this may have been his most difficult to achieve aboard the Barry & Cheryl Greth, 600cc Performance No. 71.

In the 600 Sprint feature that was postponed from July 13, Jacob Fisher darted to the early lead. Fisher fell victim to the hard charging Jackson White, who started third and had the top spot before ten laps could be recorded. On the same lap that White secured the lead, Tim Buckwalter roared into the runner-up slot. Kyle Lick, who rolled off 11th on the original start, moved into third on the 11th revolution.

Despite a few cautions that brought White back to his pursuers, Buckwalter and Lick were no match for the No. 19J out of East Windsor, NJ.

Preston Lattomus, Billy Pauch Jr., Christian Bruno, Zack Weisenfluh, and Fisher spent most of the 25 lapper dicing for positions four through eight, with Reese Nowotarski also in the mix. Lapped traffic near the end enabled Buckwalter to narrow the gap between himself and the leader, but Jackson White remained safely in front and he notched his first career 600 Sprint victory at Action Track USA.

Fierce battling marked the early laps of the All Star Slingshot 20 lap feature, with New York’s Andrew Turpin setting the pace. Behind him, Tyler Hoch, Brett Bieber, Danny Buccafusca, and Tyler Ulsh fought for position. As the top five approached a slower car at the rear of the field, Turpin and Hoch got by but Bieber got hung up behind he slower car. Buccafusca hit the brakes, turned hard right as he exited the fourth corner, and stormed into second as they rumbled down the front straightaway. Buccafusca then took the lead from Turpin on a restart just prior to the halfway point, with Hoch sneaking into the runner-up spot on the 11th tour of the speedway.

Buccafusca went on to win by a half-second over Hoch, with Turpin falling to third. Ulsh and Bieber made up the top five.

Aubrey Romig started second in the Junior Slingshot main, but blasted into the lead as the race went green. She proceeded to lead every one of the 15 laps, capturing her first ever win at Action Track USA. Romig crossed the stipe with an advantage of almost two seconds over Garrett Chillot. Newcomer Jocelynn Darinsig finished third with pole sitter Brianna Snyder placing fourth. Mason Lineman took the checkered in fifth.

Wednesday, August 3 finds another huge racing program planned for Action Track USA, as the Rapid Tire USAC East Coast Sprint Cars return for not one, but two big 30 lap main events. The non-wing 360 Sprint Cars will complete the Iron Cowboy event that was halted by rain on July 13, as they kick off with that 30 lapper. A full program of qualifying heats, semi-feature, and the regularly scheduled 30 lap feature will also be contested by the wildly competitive, clay-kickin’ wingless Sprint Cars. Also on Wednesday’s menu are the Hyper Racing 600 Sprints, along with the All Star and Junior Slingshots.

Get your midweek motorsports adrenaline rush, at the track where the Superstars come to race…at Championship Energy Action Track USA!