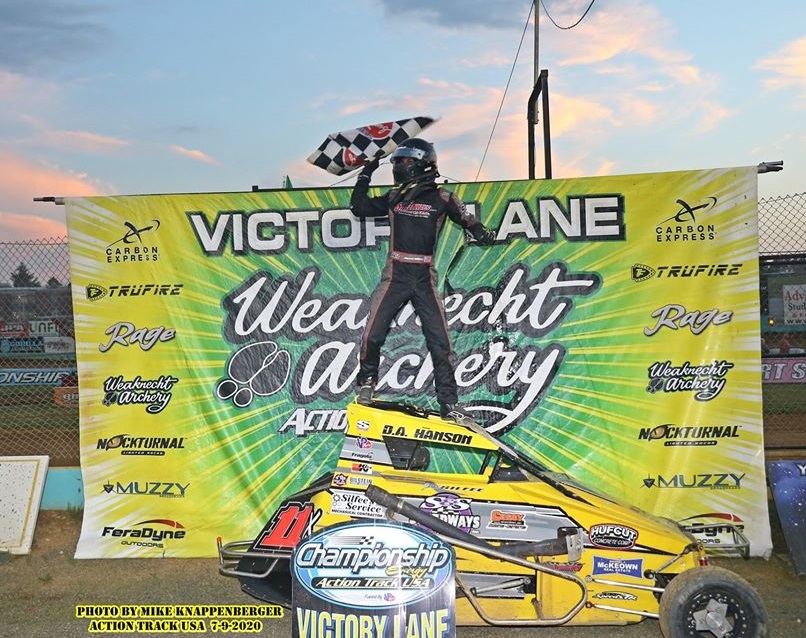 “Ronnie was just a guy who put in time and learned and got better each race” said Dianne Tobias in victory lane on Thursday night at the Championship Energy Action Track USA before the feature events began. Tobias, the wife of the late Ronnie Tobias, thanked the fans for attending on the rescheduled night for the race run in her husband’s honor. Fans were offered a good show, but the breakout of some drivers that too put in the time Dianne Tobias spoke of corner stoned the show.

Twin 20’s are run each year on the Ronnie Tobias Memorial night for the USAC All Pro Speedstrs. The event often is a showcase for different drivers at the front of the field. 2020 again provided a thrilling race that saw former Slingshot World Champion Jared Silfee hold off former Speedstr champions Tim Buckwalter and Billy Pauch Jr. Silfee led from the drop of the green, but never held more than a couple car length advantage over the field. Briggs Danner ran second until lap 15 when Buckwalter moved to the runner up spot to begin to pressure Silfee. A restart with two to go put Buckwalter on the rear bumper of the race leader along with Pauch Jr. Silfee remained steadfast to the inside line of the speedway pacing to the checkered flag in his third Speedstr start at Action Track USA.

In victory lane Barry Angstadt asked Silfee if he knew who was behind him. “I knew,” said Silfee with a large smile. “I knew who was there, but I knew if I could just stay in my line I could do it”.

The invert pill drawn in victory lane by Silfee turned the pole position over to Tj Mayberry for the second of the two twin races. Mayberry led the field until last weeks winner, Mike Bednar, threw a huge slider on Mayberry into the race lead. Bednar showed the way when on lap ten he spun out of the race lead. Steve Buckwalter inherited the race lead. Buckwalter had just wrestled the lead away from Mayberry. Mayberry would nose to the top spot before Buckwalter took it back for good. Buckwalter too had to survive a late race restart with Billy Pauch Jr. in his tire tracks.

“I know what line Billy likes to run, so I ran my line accordingly,” said Buckwalter in victory lane. Buckwalter added that he thinks they can still get better in the coming weeks using what he learned in the features on Thursday night.

Eddie Strada waged a tight battle with Joe Kay through much of the Hyper Racing Evo Injection 600 Micro Sprint feature race. Kay was in the front of the field until five to go was displayed. Strada was the first to see that sign utilizing the outside line. Strada fended off Kay for the final five circuits to win the 25 lap A Main. In victory lane Strada mentioned a few people that have helped them “up their program” including new Evo Injection. Strada noted the win is his first at Action Track for car owner Mark Manieri.

Sam Neary finally had lady luck on his side in the 20 lap Slingshot feature event that kicked off the nights big racing. Neary has been in contention each of the first two weeks only to see his hopes of victory slip away. The story was different on Thursday night as Neary held the field at bay on his way to the checkered flag. “This made up for the first two weeks and more times over” said Neary in victory lane.

Neary also won the heat race for the Slingshots.

Wednesday, July 15 Action Track USA will return with the Troy Moyer Memorial for the SpeedSTRS, 600 Sprints, Slingshots, and Junior Slingshots.

Don’t forget we are just weeks away from the Aug 5 and the USAC National Midgets Presented by Belfor Restoration and Storm Chassis plus 600 Sprint Speedweek.