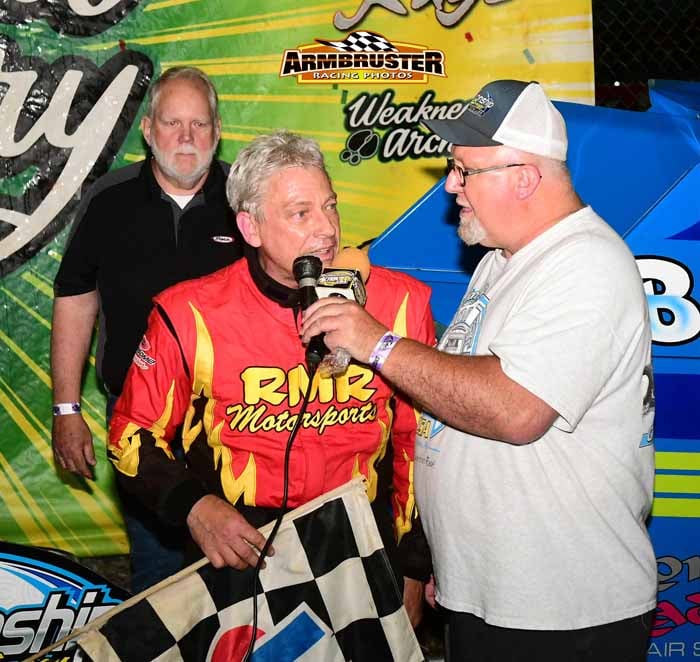 June 2–Kutztown, PA — Wednesday’s Ronnie Tobias Memorial at Championship Energy Action Track USA featured the Old Guard versus the Young Guns, and when the final checkered flag waved, the score was one to one.

Ageless veteran Tom Mayberry, from Sellersville, PA, notched his first All Pro SpeedSTR victory in the opening 20 lapper while youthful charger Alex Yankowski, from Covington Township, PA, grabbing the win in the second of the Twin 20’s.

Oley, PA’s Brett Bieber made it two in a row by winning the 20 lap main for the All Star Slingshots.

The first SpeedSTR feature went clean and green for the initial 14 circuits with Jared Silfee barely holding off a determined TJ Mayberry for the top spot. A yellow with six to go set up a double-file restart and, as the leaders bounded into turns one and two, Silfee’s car pushed up the banking and into Mayberry, causing TJ’s No. 7r to flip and come to rest at the exit of turn two.
On the restart, it was the elder of the Mayberry clan, Tom, blasting by Silfee to take the lead as they gassed their mounts through one and two. Alex Yankowski slipped past Silfee for second a few tours later, but there was no catching the former dirt modified and Legend Car racer as Tom Mayberry raced to his first SpeedSTR win for car owner Ralph Rehrig. Yankowski, Billy Pauch Jr., Louden Reimert, and Briggs Danner made up the top five.

Mayberry would suffer the same fate as his son in the second of the Twin 20’s, as a chain reaction incident resulted in his No. Glick Fire Equipment No. 17R tumbling wildly at the end of the backstretch. Like TJ, Tom was okay but dejected over his twist of fate.

The youth movement then took over with Jason Musser leading Briggs Danner, Louden Reimert, and Yankowski. A few laps after the halfway signal, Yankowski, who had worked his way into the runner up slot, executed a slide job on Danner in the fourth turn to snatch the lead away from the Allentown hot shoe. Danner attempted a retaliation slider the next time around but got very loose and sideways, allowing Yankowski to dance away from the pack. After he got the car corrected, Danner had to fight off the advances of Musser to hang on to second over the final frantic laps.
Yankowski cruised to the win over Danner, with Musser an impressive third for his best-ever Action Track USA finish. Reimert finished fourth again and Andy Haus raced home in the fifth position.
The 25-lapper for the Hyper Racing 600 Sprints may not have been highlighted by a fierce battle for the win, but it was marked by a ferocious fight for second among several drivers.

Colin White stormed to the lead on lap one—he started third in the 30-car field—from his third starting position. White ran away from the pack over the first ten trips around the racy banked oval, then survived a few restarts during the second half of the race to win by almost one second over runner-up Steven Snyder Jr.

With White stinking up the show out front, the battle royal from second through seventh had everyone’s attention, and it was sensational.

Kenny Miller III, who hustled to Kutztown after beginning an internship with an engineering firm on Wednesday, snared the runner-up slot in the early laps and tried in vain to run down White. But Kenny had to play some defense, too, because a snarling pack of hungry 600 Sprint pilots were soon on his tail.

Miller spent the remainder of the race trading slide jobs with Steve Snyder Jr. as the young lions waged a terrific war for second. Also in the mix were Joey Jarowicz, Eddie Strada, 14th starting Tim Buckwalter, and Michael Nolf. Intense battles for the runner-up spot as well as fourth place ensued over the remainder of the race as White enjoyed being way out front when dealing with lapped traffic.

White then survived a few anxious restarts, but he dashed away each time the green reappeared and went on to win by 0.888-seconds. Snyder edged out Miller by inches for second place money, with Strada claiming fourth and Tim Buckwalter rounded out the top five finishers.

The All Star Slingshots spun off 16 laps trouble free before a yellow slowed their pace. Teenager Jax Yohn fought off the challenges of Sam Neary and Bieber for much of that green flag run, but lapped traffic proved to be his undoing. As both Yohn and Neary hit the brakes to avoid contact with slower cars, Bieber spied an open lane on the bottom of the speedway and he went for it.
Accelerating off turn four, Bieber shot to the bottom and went from third to first as the leaders crossed the stripe to complete lap 12. The “Oley Jet” motored away from that point on, and even the lone restart with four to go could not stop him.

Bieber registered his second consecutive victory after going winless for the past five seasons at Action Track USA. Neary won the battle for second with Yohn a disappointed third. Blaire Schoenly wound up fourth and Tyler Ulsh rounded out the top five.

This Wednesday, June 9, the Junior Slingshots make their first appearance of the year at the Berks County oval. They will join the Speedway Entertainment All Pro SpeedSTRs presented by VP Racing Fuel, the Hyper Racing 600 Sprints, and the All Star Slingshots in another exciting program that begins with warm-ups at 6 p.m.

Coming up on Sunday, June 13, it’s the “Im-POSSE-ble”—a history making event at Action Track USA as the winged 410 Sprint Cars of the PA Posse compete for the very first time on the high banked, ultra-wide clay playground. Warm-ups begin at 6:30 p.m. for this “can’t miss” event.

All of the details can be found at www.actiontrackusa.com.