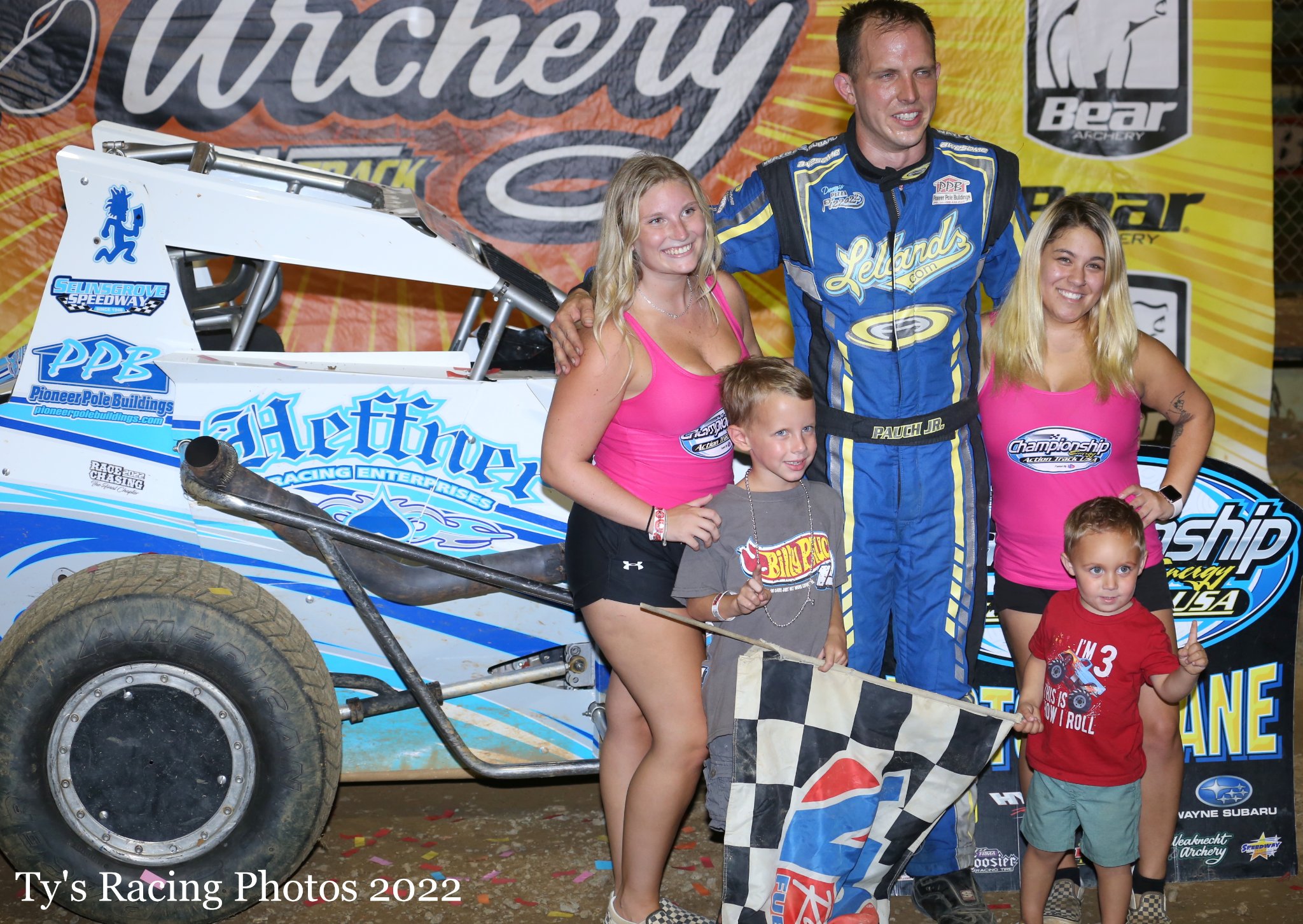 Kutztown, PA (August 10 & 11)— Billy Pauch Jr. broke out of his slump in a big way on Wednesday, charging to his third win of the season in the Scott Fick Plumbing, Heating, & Cooling 30 lap main for the Speedway Entertainment All Pro SpeedSTRs at Championship Energy Action Track USA on the Kutztown Fairgrounds.

The Frenchtown, NJ wheel-twister won both ends of the Ronnie Tobias Memorial Twin 20’s on May 25, then hit a dry spell marred by mechanical gremlins that had never before affected his Mike Heffner/ Lelands.com/ Weaknecht Archery No. 27. But all those tough nights were swept aside on the Wednesday of the Kutztown Fair as “the Kid’s Kid” returned to victory lane.

Tim Buckwalter dashed to his third win of the year in the Hyper Racing 600 Sprint Fair Nationals, worth a cool $1,500 to the Douglassville, PA throttle-jockey. On Thursday night, Brett Bieber captured his third Action Track USA triumph of 2022 in the All Star Slingshot National, while Tyler Bartik recorded the win in the season’s lone appearance of the Xcel modifieds. Chase Schott was victorious in the Junior Slingshot feature and Kenny Gilmore took the checkered flag in the Vintage Car exhibition.

Wednesday’s SpeedSTR headliner began with Doug Snyder shooting into the lead as Pauch Jr. and Mike Bednar diced for the runner-up spot.

Pauch leaped to the head of the pack on a lap three restart, leaving Snyder to battle with Bednar and a fast-closing Tim Buckwalter. Louden Reimert entered the fray to make it a four-way fight for second through fifth positions.

Bednar slipped past Snyder for second with nine tours remaining, and Reimert ducked under the No. 69s for third with five circuits left to run. One final caution flag with two to go did not alter the outcome as Pauch Jr. flashed under the checkered ahead of Bednar by nearly one second. Reimert, T. Buckwalter, and Matt Janisch completed the top five. The victory was Pauch Jr.’s 23rd in at Action Track USA, where he is the all-time leading winner in the SpeedSTR division.

The first ten revolutions of the Hyper Racing 600 Sprint Fair Nationals were absolutely incredible—and totally insane at the same time. A trio of reds and yellows interrupted the intensely entertaining action as the front runners swapped positions in each corner of the progressively banked oval.

Reese Nowotarski bolted to the early lead with Tyler Lindsay close behind. Christian Bruno started 12th and roared into fourth as Zach Weisenfluh zipped past Lindsay and Nowotarski to have a turn at the head of the field. Tim Buckwalter, who took the initial green in 13th and Steven Snyder Jr., who started 10th, were threading their way forward and soon joined the fantastic jostling for position at the front of the pack.

Another restart saw the leaders stack up while battling one another, giving Buckwalter an open lane on the bottom of the front stretch. The driver of Barry & Cheryl Greth’s 600cc Performance No. 71 took full advantage, blasting to the lead as the lead bunch entered turn one. A long stretch of green flag racing allowed Buckwalter to separate himself from his challengers. Snyder wrestled with Bruno for the runner-up slot for several laps before finally securing the position just past the halfway point of the 50 lap Fair Nationals. Snyder closed to a half-second behind the leader, but could not muster a serious assault on the high flying Buckwalter. Behind the top two, a fast and furious trifecta unfolded, as Bruno, Colin White, and Jackson White fought tooth-and-nail for the final podium position. That tussle went right down to the black-and-white, as Buckwalter scored the big win over Snyder, with Colin White emerging from the three car battle royal to notch third place money. Jackson White wound up fourth and Bruno rounded out the top five. A total of 43 entries took part in the 600 Sprint Fair Nationals on Wednesday.

Seventh-starting Brett Bieber muscled past an impressive Luke Mccloskey to snatch the top spot with nine laps remaining in Thursday’s All Star Slingshot feature. With the win, Bieber, the Oley Jet, tied Dylan Hoch for most all-time Slingshot wins at Action Track USA at 13 triumphs each.

Mccloskey, from Boyertown, PA, was making is very first start at Berks County’s Baddest Bullring, and he led the first 21 trips around the clay. But Bieber, the defending Slingshot point champion at Action Track USA, worked his way past Mccloskey on a restart to take a lead he would not relinquish. Mccloskey held off two-time winner Tyler Hoch for runner-up honors with Hoch, Danny Buccafusca, and Cody Kline making up the top five finishers in the 25 lap affair.

Tyler Bartik grabbed the lead on lap four of the Xcel Modified 20 lap feature and was never headed, beating early pace setter Eric Whitby by three-quarters of a second. Whitby and his son, Justin Schraden, waged a fiercely contested battle for second with Whitby eventually prevailing for runner-up cash and Schraden ending up third. Richie Hitzler finished fourth and Bryce Smith raced to the checkered in fifth.
Chase Schott zipped by Dylan Hahn to take the top spot in the Junior Slingshot feature. Schott raced into the lead on the sixth tour, working his way under Hahn in turns three and four, then throttling ahead as they rumbled down the homestretch. Griffin Hendershot passed Hahn for second and quickly closed the gap on Schott, creating a nip-and-tuck battle for the lead over the final revolutions. Hendershot stuck the nose of his No. 4x under Schott in the corners, but Schott’s No. 10s motored back in front on the straightaways. The duo ran side by side in turn four on the final circuit with Schott beating Hendershot to the stripe by just 0.175 seconds.

Matthew Laubach chased the leaders to the checkered, followed by Hailey Eroh and Hahn.

Racing resumes at Action Track USA this Wednesday, August 17, with a menu containing the Speedway Entertainment All Pro SpeedSTR’s, the Hyper Racing 600 Sprints, along with the All Star And Junior Slingshots. Pit gates open at 4 p.m., grandstand gates at 5:00, and warm-ups begin at 6:15.

Coming up on Sunday, August 21, is the second annual IMPosse-able, as the winged 410 Sprint Cars tackle Berks County’s Baddest Bullriing, Championship Energy Action Track USA on the Kutztown Fairgrounds. On Sunday, pit gates open at 3 p.m. and grandstand ticket sales begin at 4:30. Hot laps get underway at 6:30 with the 600 Sprints joining the 410 Sprint Cars for a crowd pleasing doubleheader.