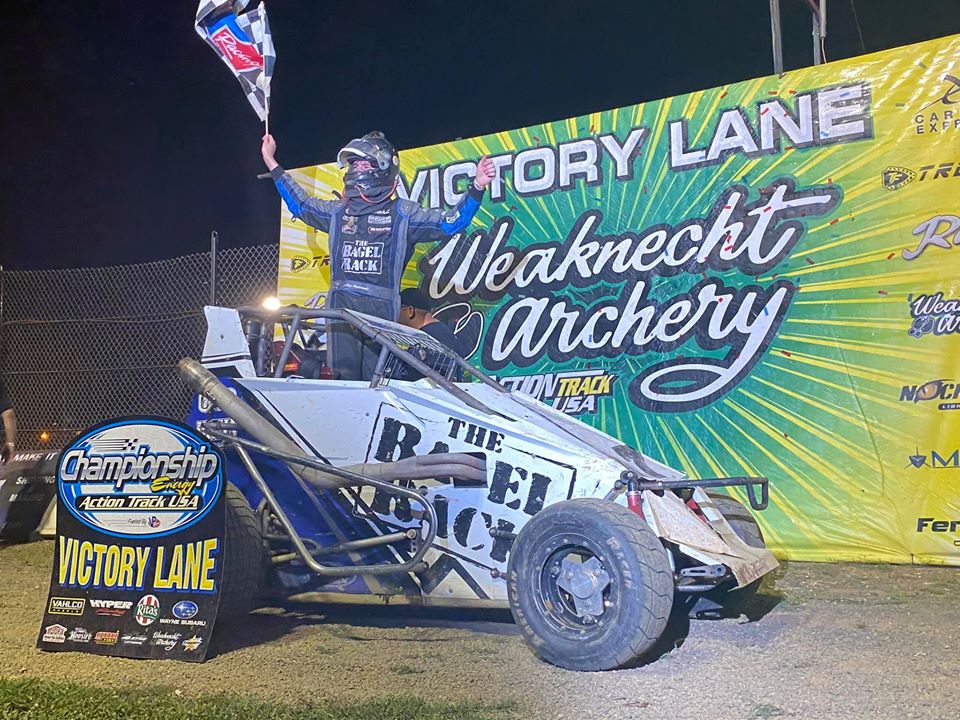 White knuckle racing might be the best description of the final night of Wednesday night racing at Championship Energy Action Track USA this season. The season finale and Championship night is right around the corner on Sunday, August 16 with three very different stories developing.

Kenny Miller III battled with his teammate Mike Bednar during much of the early laps in the USAC All Pro Speedstr feature event. Bednar would secure the top spot before a late race charge from Alex Yankowski. Yankowski caught Bednar and secured the race lead with two to go. Bednar took a big run off of turn four coming to the checkered flag, but fell inches short of victory as Yankowski was first to the line.

In victory lane Yankowski said they got the car they like back after an accident and it was a difference maker on Wednesday night. Bednar, Louden Reimert, Steve Drevicki, and Matt Janisch were the top five.

A solid night for Steve Buckwalter inches him closer to the championship in the Speedstr’s with the final race Sunday in the 40 lap $3,000 to win season finale. Buckwalter was uncharacteristically cautious for much of the event with his eye on the big prize.

Colin White is the current point leader for the Hyper Racing/ Evo Injection 600 Micro Sprints. White’s biggest obstacle came on Wednesday when the division ran their longest race of the season at the track, the 60 lap fair nationals. White was on point. White took the lead early and never looked back. The flex showed the field a bigger gap in the points heading into the Sunday finale. Speedweek winner Eddie Strada was second followed by Billy Pauch Jr. who came from the last row to the podium. Steven Snyder Jr. and Kenny Miller III were the top five finishers.

Sam Neary was on his way to his third win of the season. “And here he comes” rolled off of speedway announcer Barry Angstadt’s tongue while Neary’s car went down the back stretch. Everything was set for Neary’s win. And then… the car slowed. Neary’s car rolled very slow into turn three and it was Danny Buccafusca charging to the checkered flag. Buccafusca, who is known for wearing super hero shirts under his uniform, made a super hero like driver passing Neary just feet before the line to take the win. Neary coasted across second. Shelby McLaughlin, Gavin Danner, and Molly Struss were the top five.

Aidan Donaldson held off James Hendricks for the win in the Junior Slingshot A Main.

The champions will be crowned Sunday evening for the USAC All Pro SpeedSTR’s, Hyper Racing EVO Injection 600 Sprint Cars, and All-Star Slingshots.

Don’t miss your last chance to see all of the superstars in one place at Championship Energy Action Track USA in 2020.

Grandstands start at 5pm and Warm-Ups are at 6pm.