It’s never over until it’s over!

It’s rare that a SpeedSTR race at the Championship Energy Action Track USA is won by anyone but Tim Buckwalter or Billy Pauch Jr when they start on the front row. With the benefit of the early season redraw, they both shared row one.

Pauch Jr took the race lead and looked well on his way to the opening night Goldie & Elton Meitzler Memorial win. Pauch Jr’s car broke loose in the closing laps and went around amidst a tight battle with Mike Bednar and Briggs Danner following a restart.

Bednar took over the top spot. Once in front Bednar never looked back taking the checkered flag for the opening night victory. It’s Bednar’s second SpeedSTR win of the season.

Mike Bednar, Briggs Danner, and Steve Buckwalter made up the podium for the 30 lap race. Matt Janisch and Jason Musser were the top five finishers.

Billy Pauch Jr. recovered quickly from his SpeedSTR mishap to drive the LHS Engines 91s to victory lane in the Hyper Racing/Evo Injection 600 Sprint feature event. The win was a big one as it marks Pauch Jr.’s 100th career victory.

Damon Paul came from a B Main to finish sixth. Alex Bright, Tim Buckwalter, Connor Gross, and Preston Lattomus made up the top ten.

Brett Bieber has been to victory lane at Action Track many times, but Wednesday night marked the first time Bieber was there since 2018. Bieber took command of the All Star Slingshot feature just past the half way mark and led the remainder of the circuits. Shelby McLaughlin fought to second spot with Scott Neary filling out the podium. Thomas Nettleship and Tim Roeder were the top five.

Next Wednesday, May 26, will be BusinessLinkPrint.com Night featuring the SpeedSTRs, Wingless 600 Sprints, and the All Star Slingshots. Times for this event will return to normal Action Track USA times with Pit Gates Opening at 4:00 PM, Grandstand Gates Open – 5:00 PM, Hot Laps for all Divisions followed by Qualifying – 6:15 PM. 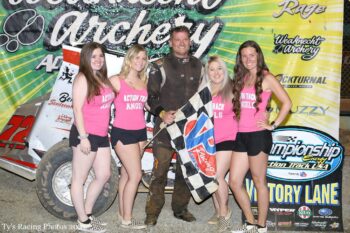