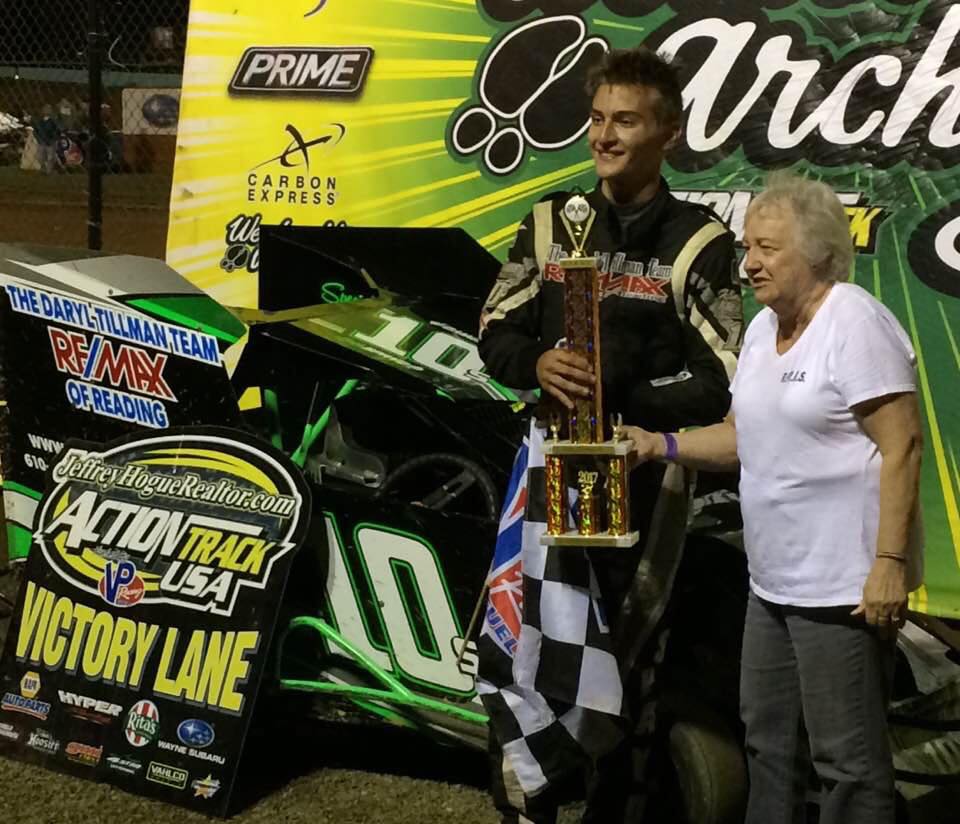 A dramatic charge, topped off by a three-wide pass for the lead, propelled Tim Buckwalter to his fifth victory of the season in the USAC All Pro SpeedSTR main on Wednesday, July 26, at the JeffreyHogueRealtor.com Action Track USA on the Kutztown Fairgrounds.

The SpeedSTR winner was not as fortunate in the Hyper Racing 600 Sprint feature, as his torrid duel for the lead with Billy Pauch Jr. ended with Buckwalter pounding the homestretch wall in the waning laps. Pauch Jr. went on to win his second wingless 600 Sprint main of the year at the Berks County oval.

Shillington’s Seth Spayd became a three-time Slingshot winner by notching the triumph in the All Star Slingshots’ Kutztown Komet 100. The race annually pays tribute to the late, great Modified ace Freddy Adam, who was known throughout his career as the “Kutztown Komet.” Freddy’s widow, Mary Adam, presented the large trophy to Spayd along with members of the Reading Fairgrounds Racing Historical Society.

At intermission on Wednesday, Action Track USA co-promoter Doug Rose addressed the crowd, informing everyone in attendance that the speedway would be dark on the next two Wednesdays, August 2nd and August 9th. “We’re only allowed to hold 12 races per year, and tonight (July 26) is race number 10,” said Rose. “We’ve got a big race on Sunday, August 6 (the fifth annual Dick Tobias Classic) and the week of the Kutztown Fair races counts as one event, so that will make 12. That means we have to cancel the next two Wednesday night events so we don’t run over our limit.”

The bottom line is this: the next race at Action Track USA is Sunday, August 6, for the Dick Tobias Classic. After that one, the track will swing back into action on Tuesday, August 15, for the Super Slingshot Fair National. There will also be events on Wednesday the 16th (Fair Week Nationals for both the SpeedSTRs and 600 Sprints, plus Slingshots), Thursday the 17th (Junior Slingshot National & Quarter-Midgets), and Saturday the 19th (Daniel Boone 100 Stock Car Race).

Wednesday’s A-Main for the USAC All Pro SpeedSTRs produced a prolonged battle for the lead between Steve Buckwalter and Jason Rochelle. The duo swapped the top spot on numerous occasions with S. Buckwalter rebounding to hold a slim advantage as they flashed across the stripe on most of the laps. As S. Buckwalter and Rochelle mixed it up for the lead, Matt Janisch and Steve Drevicki tussled for the third position. At the halfway point of the 30-lap affair, it was S. Buckwalter holding a slim lead over Rochelle with Drevicki third, Janisch fourth, and a suddenly surging Tim Buckwalter pulling into fifth after starting 15th.

Tim Buckwalter, from Pottstown, continued his march to the front as he disposed of Janisch and Drevicki. Utilizing the outside groove, T. Buckwalter swept around both Rochelle and his cousin Steve in a three-wide maneuver to take the lead with ten circuits remaining.

Once he wrestled the point away from Steve, Tim Buckwalter pulled away, leaving his cousin to scrap with Rochelle for runner-up honors.

Steve Buckwalter wound up second to his cousin, and Jason Rochelle recorded a second straight podium finish by placing third. Dylan Hoch was fourth and Janisch held on for a fifth-place finish.

“We’ve been strugglin’ with this thing,” said Tim Buckwalter in his victory lane interview. “Paul (Lotier) and I spent all day today getting this car ready and making some changes. I think we got it back; it felt great in the feature tonight. The top was slimy at first…I had to wait until it came in, then I could go to work.  I was worried about Steve, because I knew if I showed him the top, he’d be up there the next lap. But it all worked out,” said T. Buckwalter, who increased his point lead over Billy Pauch Jr. with the victory. Pauch fell back early, then climbed back through the field to record a sixth place finish.

Tim Buckwalter was right back to business in the next race, the 25-lap feature for the Hyper Racing 600 Sprints. And so was Pauch Jr., and the battle for the win would come down to this season’s most dominant drivers at the dirt track located on the Kutztown Fairgrounds.

Buckwalter, who started ninth, navigated his way to fourth by them time lap five was scored. He kept moving up in the running order, finally engaging in an entertaining duel for the lead with Matt Roselli. Roselli was planted in the high groove while Buckwalter wheeled the Greth Racing No. 71 around the bottom. On a restart with seven tours complete, Tim fired off the bottom of turn two and took command. Attention now turned to tenth-starter Billy Pauch Jr., who was threading his way through traffic. Pauch slipped into the runner-up slot on the 11th revolution and began his pursuit of Buckwalter.

Pauch closed in as Buckwalter got hung up in lapped traffic. When Tim bobbled a bit exiting turn two – with just three laps remaining – Pauch was quick to take advantage, darting past and grabbing the lead. Buckwalter recovered quickly, moving back in front as the pair raced through turn four and onto the homestretch. As they headed for the white flag, Pauch again made a run to the inside of the leader. He drifted up the track on the front chute, with Buckwalter moving higher to stay off Pauch’s right-rear tire. Tim bounced hard off the wall, handing the race lead and the 600 Sprints point lead to the driver from Milford, NJ.

The Pioneer Pole Buildings, Xtreme Custom Graphics letter X car driven by Pauch Jr. held off Austin Quick on the final lap to notch the victory. Eddie Strada, who started 20th, persevered and finished third ahead of Jay Hartman and Andre Layser. It was a season-best finish for Quick and a career-best effort for Layser.

Thirty-four cars started the Kutztown Komet 100 for the All Star Slingshots, with Nick Vinciguerra battling Kyle Smith for the early lead. They were soon joined by Seth Spayd, and it was Spayd snatching the top spot from Smith on lap 19.

Dylan Hoch, who started eighth, passed Vinciguerra for second on lap 38. The “halftime break”, which actually took place with 57 trips complete, saw the cars pitted on the front stretch and the crews permitted to do anything that could be completed on the track and within ten minutes. The top five at this juncture were Spayd, Hoch, Brett Bieber (a two-time winner of this event), Vinciguerra, and Jared Silfee, who started the race  on the outside of row nine.

When the green returned, Hoch muscled his way past Spayd in turns one and two. Spayd ducked under Hoch to reclaim the lead on lap 62. Four tours later, Silfee entered the picture as he moved to third. Dave Carraghan, who went to the rear after an early race spin, weaved his way back toward the front of the pack as he took over fifth position.

The next restart, with 75 laps in the books, Silfee tried a bold move by sneaking way down low on the race track and pulling alongside Spayd and Bieber. His assault was repelled, but Silfee was now the runner-up.

Some late race yellows kept wiping out the comfortable leads built up by Spayd. As the green reappeared each time, though, Spayd would motor away from the field. Silfee and Hoch both attempted to steal the lead away from Spayd on restarts, but the Daryl Tillman Team Remax of Reading No. 10s fended off the challenges.

As the century grind entered its final laps, Spayd pulled away a bit, leaving Silfee and Hoch to fight for second. At the checkered, it was Spayd over Silfee, Hoch, Carraghan, and Mike Taylor.

Healthy fields of 26 SpeedSTRs, 43 Wingless 600 Sprints, and 34 All Star Slingshots took part in the program. That’s 103 racecars competing at their Wednesday night home for competition.

Nick Havens qualified for the 600 Sprint feature by winning the Pioneer Pole Building Mad Scramble, and he also received a cash bonus from Hosensack Poker Club for his victory. The four qualifying heat races went to Tim Buckwalter, Jim Radney, Eric Heydenreich, and Andrew Layser. The speedway then held a pair of C-Mains, won by Johnny Smith and Tyler Lindsey. The B-Main was taken by Kenny Miller III.

The Slingshots competed in timed dashes to set the lineup for their 100-lap feature. Tim Roeder was the quickest, followed by Dave Carraghan and Seth Spayd.

With just a few laps remaining in the Slingshot feature, Ryan Davey took the nastiest tumble by a Slingshot ever seen at Action Track USA. Davey got sideways, ran over another car’s tire, and barrel-rolled four or five times in turns three and four. Luckily, Davey was okay; he climbed from the car after taking a few minutes to collect himself.

Next up is the fifth annual Dick Tobias Classic, featuring a 75-lap main event for the USAC All Pro SpeedSTRs that pays $5,000 to the winner. That race will take place on Sunday, August 6, with warm-ups beginning at 5:15 p.m. The Hyper Racing 600 Sprints and All Star Slingshots are also on the card for the special Sunday show. Rain date for this event is Sunday, August 20.

It’s all at Action Track USA on the Kutztown Fairgrounds…where the Superstars come to race!